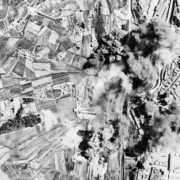 Dresden after the Second World War

February 1945. A few months before the end of Second World War, the city of Dresden was bombed. As a result of the conflict, Germany was occupied by Soviets. Just right after the Reunification of Germany and the Fall of the Berlin Wall, a tough work of reconstruction took place over the country. A group of Dresden citizens cleaned the rubble up and a lot of blueprints were drawn up thanks to the work of architects and urban planners. People wondered how the new city could appear and how it could be possible to rebuild it. In 1993, refurbishing works started in Dresden; almost ten years later, in 2005, the Lutheran church called Frauenkirche – which was considered the emblem of the city – returned to its people. Its wreckage has always represented a memoir against the war. Thanks to the citizen’s efforts, several important buildings were restored such as the Zwinger Palace and the Semper Opera House.

What happened during the bombing period

In February 1945, both Britain and U.S. Armies decided to drop two pounds of explosive and a thousand firebombs over Dresden. The air strike lasted two days no stop. The city of Dresden was destroyed by the flames. According to historians, 370000 people passed away during the attacks. The attacks in Dresden were known for their atrocity and then depicted in a novel called “Slaughterhouse-Five” by Kurt Vonnegut.

The “Trummer Frauen” were a group of women who helped with the reconstruction of German destroyed cities. War reduced men’s workforce: husbands and sons died or never returned home. On their behalf, women took the reins of Germany’s cities restoration, being almost 7 million more than men. With their help, women freed cities from debris. The age of the so-called Trummer Frauen goes from 15 until 50. Moreover, allied powers issued an order for women to help get rid of rubble. A lot of volunteers joined and supported them. In different German cities like Berlin, Leipzig, Magdeburg e Nürnberg set out a plan for rubble removal. In Dresden, almost 492 men and 512 women took part in disposal operations. At the end of the 1946, the number of working women reached 580.