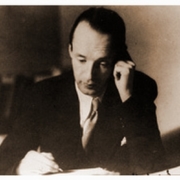 Nabokov’s family moved to Berlin in 1920. In those days, many people left Russia because of the Civil war, and from 1922 to 1923 more than 300.000 Russians reached Berlin. Immigrats was mainly concentrated in Wittenbergplatz and Charlottenburg (this latter was ironically called Charlottengrad). Vladimir Nabokov was among those who arrived in 1922. His arrival was quite tragic: after just a few weeks, his father passed away while trying to save Pavel Miliukovl, a notable Russian politician, during an attack.

Nabokov spent his time within the Russian community, as he has never been able to integrate in the German society. In fact, he then admitted he could not stand Berlin. “Upon moving to Berlin I was beset by a panicky fear of somehow flawing my precious layer of Russian by learning to speak German fluently…”, as he wrote in his work Strong opinions, published in 1973. He stayed in Berlin till the late 1930s, when the rise of the Nazi party pushed him to move to the United States.

In Berlin, Nabokov wrote his first works in Russian and published them in some newspapers, which were printed by some Russian immigrants. His first book (Korol Dama Valet) was published by a Russian editor. He also translated in English a great number of books. In fact, the cultural hybridization shines through them: even though, those books belong to the English literature, styles and themes are typical of the Russian culture.

A guide to Berlin

A Guide to Berlin is one of those. This short novel, published in 1925, describes Berlin from the inside perspective, through the eyes of an unidentified character. The novelist believes in how important it is to immortalize everyday life: “So that could be reflect in gentle lens of future times”. The guidebook offers few reference points, which are concretely recognizable: narration is subjective and far away from a guidebook-style.

https://en.berlinoschule.com/wp-content/uploads/2019/04/nabokov-1.jpg 499 640 Annalisa Gioioso https://en.berlinoschule.com/wp-content/uploads/2017/11/logo_spaced-300x300.png Annalisa Gioioso2019-04-12 14:42:432021-02-09 23:05:39Nabokov lived in Berlin for 15 years, but he never integrated in the German society
Scroll to top
We use cookies on our website to give you the most relevant experience by remembering your preferences and repeat visits. By clicking “Accept”, you consent to the use of ALL the cookies.
Cookie settings ACCEPT
Manage consent