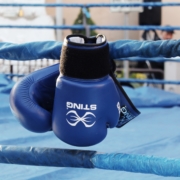 Who is Johann Trollman?

Johann Trollman was a Sinti boxer who started his career during the Nazi regime. On the ring, he used to wear a pair of shorts on which the tiny word “Gypsy” had been sewed. Trollman was born in 1907 in Hannover, it was also known as “Rukeli,” which means “tree,” due to his prominent figure and his curly hair. Although he was a professional boxer, he has always been branded as “nomad.” Trollman was known for his original way to fight like a dancer. Disparaged by the press because of his approach to competitors, he was exempted from the Olympic team of ’98 beacuse of his gipsy origins.

When Hitler rose to power, Germany’s boxing clubs were reorganized, and non-Arian fighters were excluded. To obtain the middle weight title, Trollman had to fight against the German Adolf Witte. Even if he won the match, Nazi authorities stripped him of his title eight days later and gave it to Gustav Eder. Trollman took up the challenge and fought against the new champion. However, German authorities forced Trollman to change his original way of fighting. As a response, the gypsy boxer arrived on the ring after having dyed his hair blonde and covered his body with flour, to mock the regime.

The Sinti boxer had to pay up for teasing Nazis

Due to Gustav Eder’s match, Trollman lost both his chance to regain the title and his fighting license. Furthermore, his failure forced him to work as a waiter for a living. After being threatened, the Sinti boxer had to leave his family and underwent a sterilization. In 1942 he was arrested and forced to join the eastern front. Later, he was deported in Neuengamme, a concentration camp where German soldiers forced him to make illegal fights over the night. Trollman was moved again into Wittenberge, where he had his last illegal match. His victory stirred up general unrest among German soldiers, who killed him. Today the German boxing federation recognizes his value and apologizes to the family for what happened during those years.